Jessica Alba reveals she is the 'disciplinarian' of her household, but praises husband Cash Warren for being such a good father. 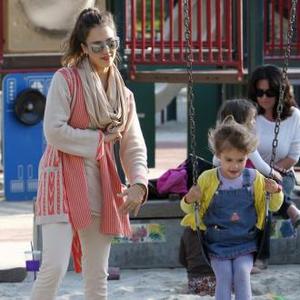 Jessica Alba is the ''disciplinarian'' of her household.

The 'Spy Kids 4' star - who has daughters Honor, three, and Haven, five months, with husband Cash Warren - admits she is always the bad cop when it comes to laying down the law.

She said: ''I'm the disciplinarian. I think it's because I was kind of a naughty kid myself - I'd push my parents' buttons and test them to see how much I could get away with.

''Cash, meanwhile, was always the perfect kid - the straight-A student who was everyone's sweetheart. It was never in him to be naughty. I think I just know, from me being that other kind of child, how to cut off bad behaviour and redirect it.

''So when Honor tries to do something she shouldn't, I have to say to Cash, 'Let her know right from the beginning that she can't'. I'll put her in time-out and tell her, 'Think about the choices you've made'.

But the 30-year-old actress believes she couldn't have made a better choice when it comes to her husband - who she met on the set of 'Fantastic Four' in 2004.

She told Parenting magazine: ''Cash is a super dad. If I'm with Haven, he'll make Honor's lunch or take her to the park. They see movies or draw together - she'll even watch sports with him.''

She insists having a baby was easier second time around, although they had to prepare Honor for the new addition.

Jessica explained: ''We'd say things like, 'You know, when the baby comes, babies can't have lollipops or go on a swing. They can't play dress-up'. Honor realised she was going to be the cool sister.

''Now, she's really into being my helper. When I change Haven's diaper, I ask her, 'Can you throw this away for Mommy?' or 'Can you get me the wipes?' She's really into it. I tell her, 'Oh, you're such a good big sister!' and give her a high five.''