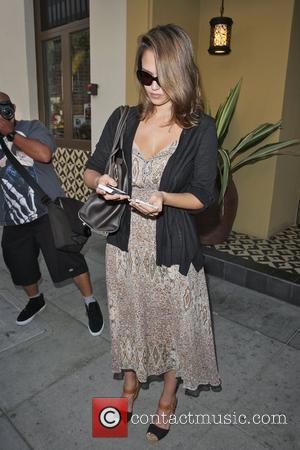 Jessica Alba has spoken out about the birth of her second daughter last month (Aug11), revealing she suffered a complication so unusual, the doctor had "never seen anything like it before".
The Fantastic Four star and her husband Cash Warren became parents to Haven Garner in August (11), and Alba has now debuted intimate photos of the tot for a spread in Britain's OK! magazine.
The actress has also revealed how painful the delivery was compared to the birth of her first child, Honor Marie.
Alba says, "I wasn't screaming and hollering like you see in the movies but it was still intense... I didn't scream for either (birth) but I was definitely more uncomfortable with the second. Labour is painful."
Alba goes on to explain the meaning behind Haven's name, revealing the baby was born while still in the amniotic sac, which holds a developing fetus until shortly before birth.
The sac normally bursts inside the expectant mother, but Alba's doctor was stunned when the little girl was born still in her "safe haven" in the sac.
Alba adds, "When I delivered Haven she was born still inside the amniotic sac, which is rare. When I was in recovery we still hadn't chosen her name. Cash picked her up and said she came into the world in her 'safe haven' and it clicked right then for both of us...
"The doctor had never seen anything like it before. He grabbed the nurse and said: 'Look at this!' I was in the middle of pushing and he told me to hold on a minute and not to push! He was wearing basketball shorts and a T-shirt and said: 'Oh I have to get my scrubs on for this!' The sac burst on its own after she came out. It was a trip."