New York-based singer/songwriter, Jesse Malin, has been playing music since he was 12. 'It's all I wanted to do my whole life. I put so much into this, it's a connection, a commitment, a lifestyle,' he says. 'It's not like buying a t-shirt, smoking a cigarette or having a funny umbrella in my drink.' Critically acclaimed but largely underrated, Malin still operates under the radar but he has attracted a loyal core audience due to his passionate live performances that keeps his reputation alive in Europe. He's back this month playing a string of charity gigs and a mini UK tour to promote his new live album, Mercury Retrograde and a covers record released earlier this year, On Your Sleeve. The punk poet spoke to Herpreet Kaur Grewal.

Isn't Mercury retrograde an astrological thing?
Yeah, they say that when Mercury is in retrograde, you shouldn't make any business decisions and electrical things fuck up. You can ponder and get ready to make decisions but don't sign anything because it will fall apart as the planets are not aligned properly. The actual show is recorded at a club in New York called Mercury Lounge last Christmas. Before I got a record deal, when I was a solo guy and was just playing Fine Art of Self Destruction [his first album] songs that's where I started. So going back links in with the retrograde in the title.

Why'd you do a covers album?
Bands that did covers always gave me an insight into where they were coming from. The Ramones would cover 'Let's Dance' or the Clash would cover 'I Fought The Law' and you would go check out the original and learn something. Dead Kennedys covered 'I Fought the Law' and they sang 'I fought the law and I won' and they dedicated it to this politician in San Francisco who was corrupt. It's a way of having fun at your shows but showing the audience something different. This album came about because it was the holidays and I get bored after two days if I am on holiday. So, I got my friends together and in one week we made a low-budget covers record. It's a schizophrenic mix - the only connection being they're all songs that I love, hence On Your Sleeve. It's a love letter to music and to rock n roll. It's had hot and cold reviews but that's the chance you take. It was fun to try on other people's clothes.

How's the new album coming along?
The new record will come out in the new year. I did three solo records and then I did a covers record. I've been running full on touring and recording, that's what you have to do but I am in a place where I want to sit back and think for a minute and observe. Not for too long - then get back in it again.

What kind of new direction do you think the new album take?
I want to make a sparse, warm record. But I can say all those things and I could go in the studio and it'll turn out to be completely different. I want to work a lot with rhythms, not electronic beats but with stuff built around bass and groove-driven. It sounds clichÃ© but songs that have that happy-sad thing sitting on top of some kind of groove line, something really natural, honest, warm. Glitter in the Gutter was more of a tough, power pop record. All three of my solo records are different. For the new one, I feel like some kind of change, it's gnawing at me.

What does Barack Obama's election to U.S. president mean for you? Will it affect your music?
His victory makes people feel that there is a chance to do something better in my country and that affects the world even though all government leaders operate on a level of lies and manipulation. This is clearly a situation of lesser evils and a man who is intelligent, articulate and passionate in his communication. It's a little less embarrassing as an American. Being a musician you have to play the games at some level, dealing with promoters, record companies - the business. You have to find ways to communicate something real and heartfelt. There is a certain optimism that I get from music, both my own and others that the message, at least right now, of Barack Obama, seems to mirror.

What's your favourite city in the UK aside from London? Why?
Liverpool because it feels like a scene out of Quadrophenia when you go out at night. There is great awareness, rock history, soul, the younger generations, deejays, dancing, etc. There's a cool vegan restaurant a few flights up in a weird building, off the High Street. It was one of the first cities that seemed to embrace me on my first tour as far as live audiences go. I like the old ''pre-industrial' appearance and salt of the earth feel walking the streets in that town. I'm a big walker, searching for something. Liverpudlians also have a great sense of humour. Ask the Beatles or Paul's grandfather. I heard he was a very clean man.

You've been playing in bands since you were 12 - what are the perks of starting that young?
It's not the most normal upbringing but it taught me that people are different and not to conform to the team, to think differently. I have to say it really saved me. Meeting people who you grew up loving as a fan [was a great perk]. When I was in a band called D Generation we were big fans of Cheap Trick and the Ramones. Suddenly I was not just a kid on the outside trying to reach Joey Ramone for an autograph, he was at my gig and asked me to go on tour with him because he liked the music. I haven't met that many people who have wanted to make me go home and burn my records.

Who has?
Bob Dylan was creepy, far away and disconnected. When I first met Johnny Ramone he was kind of racist but I guess that was his thing and he had no bones about that. Joey was leftwing and Johnny was right wing.

What's your heritage?
Both sides of my family have Russian, Polish, German Jewish ancestry. My Dad was born in the Bronx and my Mum in Queens. My great grandparents were born in Russia. When I was a kid I was really not into being Jewish. In New York there were a lot of Jews, a lot of prejudice and I thought it was uncool. I thought my family were just nerds with curly hair and I tried to straighten my hair. But now I appreciate the culture, the humour and the Woody Allen/Mel Brooks/Lenny Bruce side of Jewish identity. I guess I am pretty American but my childhood in New York wasn't really a part of America. Neighbourhoods were different and unique but now it's much more commercialized and gentrified. But the whole world seems to be like that now. Everything is like a big mall.

Jesse Malin - On Your Sleeve 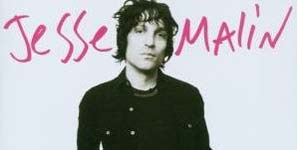 Jesse Malin - Glitter In The Gutter

Jesse Malin - The Fine Art Of Self Destruction