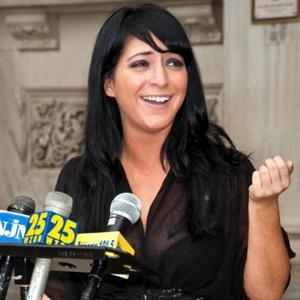 The reality TV star - who famously left the house last year after getting fired from the t-shirt shop and having a fist fight with Snooki - was shocked when her boyfriend David Kovacs proposed at STYLE360's Sachika show in New York yesterday (16.02.11) with a 2.5 carat diamond ring after only a few months of dating.

A source told People magazine: "She said yes. She was completely surprised and said, 'Are you serious?' She looked really happy and shocked. She covered her face with her hand and dropped The Ring on carpet because she was so nervous. He then picked her up and they hugged and kissed."

Angelina,22, had flings with both Mike 'The Situation' Sorrentino and Vinny Guadagnino during her time on the MTV reality TV show but Vinny recently revealed he was happy she had quit and been replaced by Deena.

He said: "We told Deena from day one, the way you treat us is the way we're going to treat you back. We're not mean people, what happened with Angelina was because she was giving us that kind of bad vibe and all we could do was give it back to her.

"We give Deena so much credit because she has come into a house where we've all bonded already. Deena is the complete opposite of Angelina."