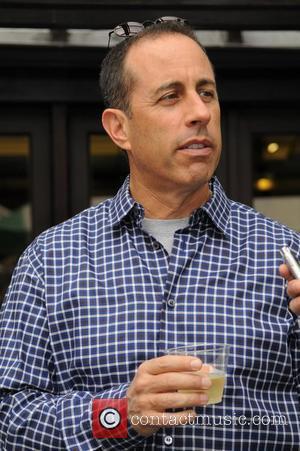 Jerry Seinfeld is launching a new comedy series online, to combine his love of comedy with his love of vintage cars. The series is entitled Comedians In Cars Getting Coffee. A teaser trailer has been posted online, showing the comedian driving a variety of vintage cars, with a variety of comedians. His passengers include Ricky Gervais, who can be seen looking a little agitated by his open-top ride around town, as well as Alec Baldwin, Michael Richards and Larry David. David, of course, manages to look thoroughly nonplussed by his classy vintage car experience.
The series will debut online on July 19, 2012 at 9pm Est and was originally thought to be titled Comics and Cars, though he has clearly decided to opt for a slightly less snappy title. Seinfeld is known to be an enthusiastic collector of vintage cars and is thought to own a staggering 46 Porsches. His fleet reportedly includes the first Porsche 911 ever manufactured, as well as the last. His Porsche 959 is one of only 337 ever made.
Comedians In Cars Getting Coffee is produced in partnership with Crackle, which is the online outlet for Sony Pictures Entertainment, Wall Street Journal reports. A spokesperson for Seinfeld refused to comment on the business structure for the show, or how it was funded. They also refused to disclose whether or not there will be advertising features run during the show, or, indeed, how long each episode might be.