Funnyman Jerry Seinfeld Has Posed For A Mocking Photograph Online After Police In New York Swooped On His 12-Year-old Son For Selling Lemonade To Raise Money For Charity. 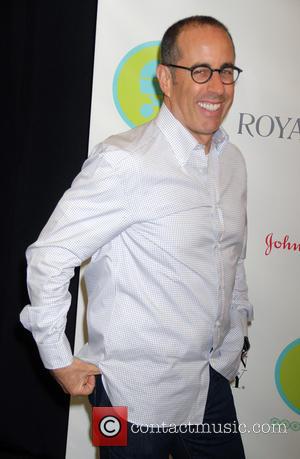 The stand-up star's boy Julian and two pals had set up a traditional summer soft drinks stall near the family's home in East Hampton in a bid to boost funds for a baby clothes charity.

However, cops shut down the roadside refreshment booth citing local village laws following a complaint about illegally parked cars in the area.

The incident prompted Seinfeld, Julian, and the boy's two pals to pose with their arms behind their heads in an 'arrest' stance as the police officer retreats to his car in the distance.

The image was posted on the Instagram.com page of Seinfeld's wife Jessica, alongside the caption: "Lemonade dreams crushed by local neighbour but not before raising lots of money for (the charity). Thanks to all our customers and big tippers!"

The boys' stall was raising money for Baby Buggy, a charity set up by Jessica to provide kids' clothing and baby equipment to needy families.