Jerry Hall believes her daughter Georgia May Jagger is a great model because she has accepted what is unique about her looks. 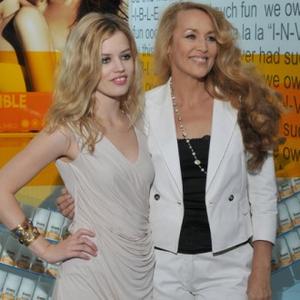 Jerry Hall thinks her daughter Georgia May Jagger is an "incredibly sexy" model.

The blonde star - who had the 20 year old with rocker Mick Jagger - believes her child is a great model because she has "accepted" who she is and always embraced her unusual features.

She said: "The last couple of modelling jobs I did were with Georgia, like the H&M campaign we did together last year, so she's given me a bit of a revival. It was great to work with her; I think she's incredibly sexy.

"One of the best things about her is that gap in her teeth. She never fixed it. It's all about that acceptance of the way you are - and she understands that."

However, she reveals her daughter used to be embarrassed when she used to pick her up from school in full make-up and designer clothes.

She told the UK's Harper's Bazaar magazine: "Georgia didn't like it if I turned up at school all made-up. She preferred me to be wearing no make-up and tracksuit bottoms, like the other mums.

"She didn't like Dad picking her up in a fancy car, either. We used to go and visit Mick all over the world on his tours."