Jeremy Renner is said to be ''devastated'' over the loss of his eight-month-old French bulldog Franklin. 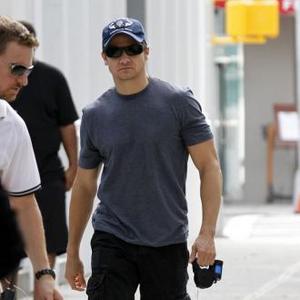 Jeremy Renner is mourning the loss of his French bulldog.

The 'Bourne Legacy' actor left the eight month old puppy - named Franklin - with his business partner Kristoffer Winters, who went out to his nephew's little league baseball game in Orange County, California on Saturday (10.03.12) when the incident happened.

The dog was running around the field in the heat and began convulsing and vomiting when Kris returned from getting a snack, only for him to die soon afterwards.

According to TMZ.com, three people tried to revive the young pet with mouth-to-mouth resuscitation, but it was not successful.

The 41-year-old actor is said to be devastated by the loss, and he has previously claimed Franklin was the only constant in his very busy and ''lonely'' life.

He said: ''Right now the only thing consistent in my life is that little dog. That's why I got it'.

''I was getting really lonely. I needed somebody or something to be there with me through the whole Journey.''

French bulldogs are known to suffer from heart problems, which can be made worse in hot conditions.