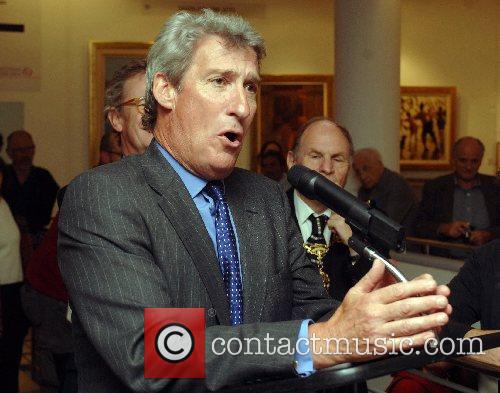 The attention towards his beard escalated to the point where a Twitter account was launched on its behalf, with the Twitter bio "The most talked about beard on the planet." It's true: Paxman fans, fellow BBC presenters and celebrities alike have united in their appreciation towards the 63 year-old's freshly hirsute image.

However, the commonly cantankerous interviewer has also spoken out about his employers' hatred of beards: "Unless you're lucky enough to be Uncle Albert on Only Fools and Horses, Demis Roussos or Abu Hamza, the BBC is generally as pogonophobic as the late-lamented Albanian dictator, Enver Hoxha," comparing the broadcaster to the Albanian dictator who banned all beards in the country because he regarded them as unhygienic.

Jeremy keeps scratching me. MAN UP AND ACCEPT THAT IM GOING TO BE ITCHY IF I WANT TO.

Fellow presenter Ben Fogle concurs, indicating that Paxman's much-lauded beard may have its days numbered if Beeb bosses have their say: "I have Paxman beard envy. Everytime I grow one I get told to shave by television execs. TV hates a good beard #savethebeard." Robin Lustig, former BBC Radio 4 presenter also added his voice to the growing exposure of the BBC pogonophobia - the fear of beards - tweeting "I was told that if I seriously wanted to do more, I would have to get rid of my beard."

I have Paxman beard envy. Everytime I grow one I get told to shave by television execs. TV hates a good beard #savethebeard

Comedienne Jenny Éclair joined in the mass fun-poking at the bemused presenter: "I like Paxman's beard. Looks like he might ride a Harley come the weekend," whilst Rob Manuel, editor of newsletter B3ta jibed "I hope Paxman's Beard is the episode of Newsnight where Jeremy meets the evil Jeremy from the parallel universe."

"There's a lot of rubbish on Twitter," grumbled Paxman's voice from behind a layer of grey bristles when the subject that's been treated with higher precedence than current affairs. He's not wrong, but after years of Paxo skewering frightened junior MPs in interviews, this is pure gold.

Distinguished or dorky? Gorgeous or grizzled? What's your reaction?