Ahead of the debut of 'The Grand Tour' next month, the trio appeared on Corden's 'The Late Late Show' to participate in a 'Carpool Karaoke'-style competition segment.

As the former presenters of ‘Top Gear’ they were probably one of Britain’s most famous entertainment exports, but now Jeremy Clarkson and his colleagues Richard Hammond and James May have appeared on James Corden’s ‘Late Late Show’ in the US ahead of their new series ‘The Grand Tour’.

The trio are launching their massively anticipated new motoring series ‘The Grand Tour’ on Amazon Prime in just over a month’s time.

Ahead of the grand unveiling, they appeared in a ‘Carpool Karaoke’-style segment on the late night chat show where they raced cars around a desert track, and answered questions from their fellow Brit James Corden. 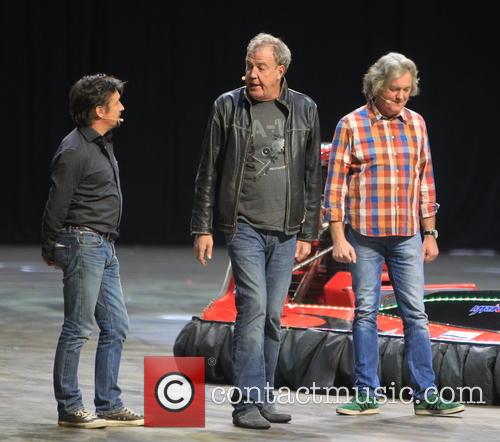 (l-r) Richard Hammond, Jeremy Clarkson and James May in 2015

The presenters, who quit the BBC’s ‘Top Gear’ in 2015 after Clarkson’s now-infamous ‘fracas’ when he punched one of the show’s producers, asked questions about cars, the new show and whether they missed ‘Top Gear’ – for any questions they got wrong (or Corden thought they got wrong) he added a second to their lap time.

“Do you miss ‘Top Gear’?” yelled Corden as they pelted around the track in Willow Springs Race Course in the Mojave Desert in an extremely noisy car.

Jeremy considered it for a while, then ducked the question by saying: “Oooh, ask me about idiots and politics.” That’ll be a ‘no’, then.

The appearance comes just a few days after reports that ‘The Grand Tour’ would eventually be coming to terrestrial TV in Britain were officially denied. If they were true, it would certainly have been one in the eye for the BBC, whose re-vamped version of ‘Top Gear’ with Chris Evans and Matt LeBlanc presenting was received poorly this summer.

‘The Grand Tour’ makes its debut on Amazon Prime on November 18th, with new hour-long episodes being added to every Friday for 12 weeks.