Have Richard Hammond And James May Been Offered £4.6 Million Each To Continue 'Top Gear' Without Jeremy Clarkson?

The BBC are said to have offered the pair a mega money deal to stay as ‘Top Gear’ presenters.

Richard Hammond and James May could soon become the highest paid stars at the BBC, if they accept a deal worth £4.6million each to stay on as hosts of 'Top Gear' for two more series. According to the Daily Mail, the corporation is willing to go to extreme lengths to keep the duo and prevent them from being snapped up by rivals ITV or Netflix. 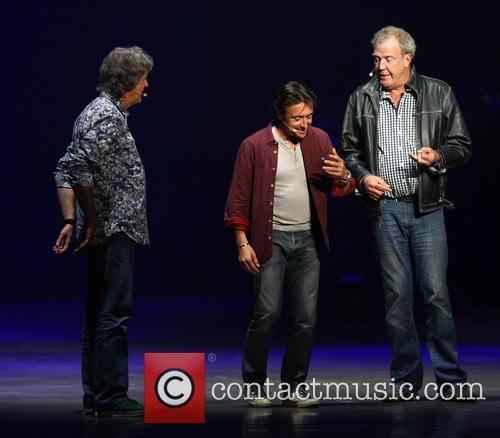 The trio during 'Clarkson Hammond and May Live'.

But the corporation isn’t intending to replace Jeremy Clarkson anytime soon. The BBC is said to be considering modeling the new series of the show on ‘Have I Got News For You’ or ‘Never Mind The Buzzcocks’, which saw a guest host every episode rather than a permanent presenter.

More: Jeremy Clarkson "Fed Up" With Speculation About His Future After 'Top Gear'

However the revolving door of presenters might only last for one series, as sources have told The Daily Mail the plan is for Clarkson to come back sooner rather than later. “Hammond and May will go back to the BBC. Jeremy Clarkson goes back a season later. Then it’s all like it never happened,” a source told the newspaper.

But it’s no real surprise that the broadcaster is willing to accommodate the show’s stars, as the program is said to be worth around £50million to the BBC's commercial arm. But the Beeb could face a battle to keep it’s stars from rival channel ITV who are said to be keen to sign the ‘Top Gear’ trio.

More: Will Jeremy Clarkson Stay Silent On His 'Top Gear' Exit So Live Shows Can Go Ahead?

While an ITV series would not be able to use the ‘Top Gear’ format or name, it could launch a new motoring show fronted by the same team. But the station is keeping quiet on the rumours with a spokesperson telling the Mail, “We haven't commented, and aren't planning to comment, on the continual Top Gear speculation which is swirling around the television industry”.