'The Grand Tour' released its first trailer ahead of the series starting on Amazon Prime on November 18th.

There’s just over a month to go until Jeremy Clarkson’s long-awaited ‘The Grand Tour’ finally makes its debut, and the public has now gotten its first proper taste of the new motoring series with a brand new trailer.

Opening in a drizzly car park at a British racetrack, the 94-second clip features a broken arm, tanks blowing up vans and Clarkson trying to lead a camel up a ramp. 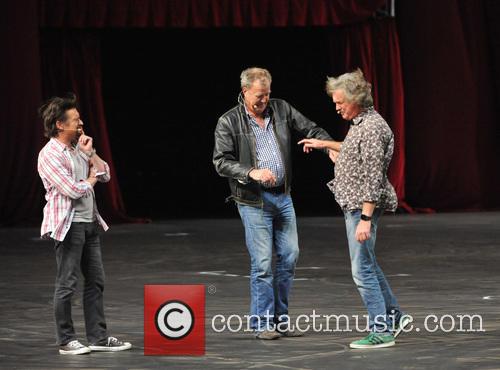 Jeremy Clarkson, Richard Hammond and James May live in 2015

Appearing in what looks like a very expensive linen suit, Clarkson tells the team that “looking good is more important than looking where you're going”. James May later explains to the camera “we're going on a road trip in very exotic cars” as they explore the roads in the latest Ferraris, McLarens and Porsches.

‘The Grand Tour’ will finally be released on Amazon Prime on November 18th, with new episodes being uploaded every Friday for 12 weeks.

It comes 18 months after Clarkson was sacked from the BBC for punching a ‘Top Gear’ producer while filming on location in North Yorkshire in March last year. Richard Hammond and James May followed him out of the door over the ensuing months, with ‘Top Gear’ being re-booted with Chris Evans and Matt LeBlanc as presenters this summer.

Meanwhile, recent reports indicate that the production team spent an eye-watering £2.5 million on ‘The Grand Tour’s opening scene of the first episode alone – making it the most expensive single sequence ever seen on the small screen – and that’s not even included the £20 million worth of cars!

According to The Sun, it was shot in the Californian desert and is said to feature 150 supercars, a couple of thousand “petrolheads” and assorted dancers and performers, and six jet planes.