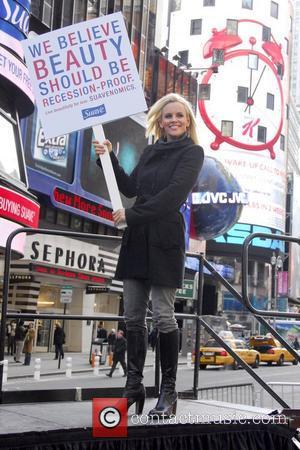 Picture: Jenny McCarthy launches the Suave 'Beauty Stimulus' campaign, revealing to Americans how they could save billions on beauty products in Times Square New York City,...

Busty actress/model Jenny McCarthy's ex has revealed he misses nights of passion with the star - because she was "a freak in the sack".
Actor/director John Asher, who was married to MCCarthy from 1999 to 2005, feels sure his ex-wife's current beau, Jim Carrey, is having the time of his life in the bedroom - because the actress really knows how to spice up sex.
Asher revealed his ex liked threesomes and once even invited three other "naughty sweet young girls" to join them for sex in a recent ConwayAndWhitman.com interview.
He said, "She'd be the subject of most of the attention, but always kept me in the mix. Jenny was a freak in the sack and beyond.
"There are some things that she's done where I've thought, 'No other woman will ever do that.' It's a helluva show."
Asher reveals his marriage ended when the couple's son Evan was diagnosed with autism and needed his mum's full-time attention.
The writer/director explains, "When something traumatic happens to a child, it either pulls the parents together or drives them apart."