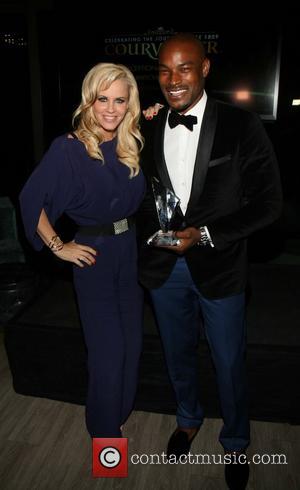 Newlywed model/actress Jenny McCarthy has turned to the Fbi after becoming the latest victim of the ongoing Hollywood hacking scandal.

A haul of nude and semi-nude snaps purporting to be of the busty blonde were posted on websites 4chan and Reddit on Tuesday (23Sep14), days after similar photos of Amber Heard, Rihanna, Kim Kardashian and Gabrielle Union also appeared online.

Reports suggest some of the 'selfies' feature MCCarthy with an unidentified man and were taken prior to her romance with her now-husband Donnie Wahlberg, who she wed last month (Aug14).

MCCarthy's representative has now confirmed a few photos were stolen from her personal cloud storage account, but insists the fully naked shots are not the real deal.

A statement released to UsMagazine.com reads: "Certain photos claiming to be hacked photos of Jenny MCCarthy and posted to various websites are not MCCarthy at all, but someone else, including the most explicit nude photos.

"Other photos are stills from a comedy skit from her Tv special, Dirty, Sexy, Funny. A small number of photos are of MCCarthy that were stolen from her hacked phone account."

The publicist continues, "MCCarthy's representatives are reporting the theft to the Fbi and contacting all websites posting the photos to demand the immediate removal of all personal and private photos of her, including nude photos."

Tuesday's leak occurred three weeks after cyber criminals violated the privacy of female stars including Jennifer Lawrence and Kate Upton and shared their naked snaps with the world.

That case is also currently under investigation by the Fbi.