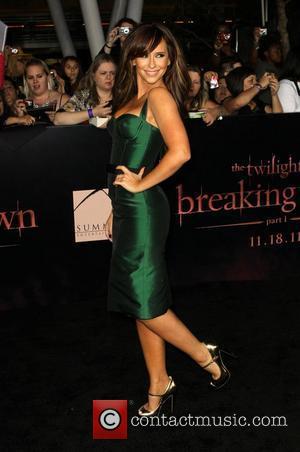 Jennifer Love Hewitt wowed the waiting crowds at the Twilight Breaking Dawn premiere at the Nokia Theatre in Los Angeles on Monday (14th November 2011), rocking a revealing green dress with black belt strap.
Hewitt has made numerous red-carpet appearances in recent weeks despite seemingly not having anything to promote - however, the actress worked the crowds in Los Angeles and was a surprise hit at the star-studded bash. The 32-year-old actress also stole the show at the Twilight premiere of 'Eclipse' in 2010, wearing a lacy black creation, and her efforts may have something to do with a certain leading actor. Speaking to OK Magazine last year, Jennifer revealed her latest crush was Edward Cullen himself, Robert Pattinson, saying, "His features are so striking, and I love that he has such a soft voice". The British actor attended Monday's premiere, but seemed solely concerned with his co-star Kristen Stewart, whom fellow actress Mia Maestro claimed he is dating, telling E! Online, "They're a couple in real life".
Although she earned a Golden Globe nomination for her television work, Jennifer Love Hewitt has struggled to make the foray into Hollywood and was rated as the world's worst actress by Slate's comprehensive study of Rotten Tomato aggregates earlier this year. Her rating suffered from appearances in the likes of Sister Act 2: Back in the Habit and Garfield: A Tale of Two Kitties.