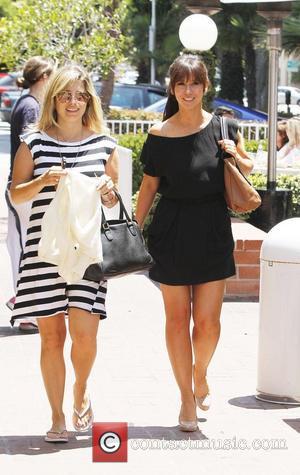 Jennifer Love Hewitt hit two different parties in West Hollywood on Wednesday evening (10th August 2011) - wearing the same dress to both. Hewitt, who will return to television in the upcoming series 'The Client List', was snapped in her glittery long sleeved dress at two high-profile bashes, reports US Weekly.
First up, she joined stars such as Lea Michele and Kaley Cuoco at the InStyle Summer bash before heading to the Alice and Olivia shoe launch hosted by Lauren Conrad and Jordana Brewster. The brunette reportedly went on a recent date with 'Bachelorette' contestant Ben Flajnik, with a source revealing, "She began pursuing him right after the finale aired". The couple were spotted cozying up at San Francisco's Lions Pub on 6th August 2011. An eyewitness noted, "It seemed like a first date, but he wasn't overly affectionate, adding, "As the bar started to close she grabbed his hand and marched outside". The following morning, Hewitt seemingly confirmed the rendezvous, tweeting, "Morning lovelys! I got lost in the most amazing sat! Just when you think u can't be surprised....You are and it's awesome!"
Recent rumours suggest Jennifer Love Hewitt could replace Mariska Hargitay on 'Law & Order: Svu', although the actress appears to have turned attention to other projects.