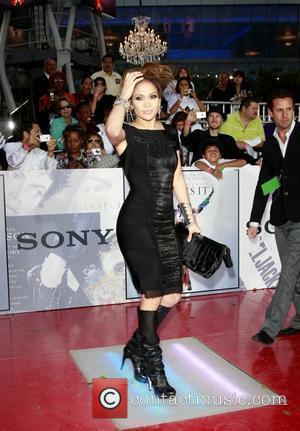 Jennifer Lopez is fighting the release of yet another home movie shot by her first husband OJANI NOA, which reportedly shows the star getting on the back of a motorcycle in a dress without underwear.
Noa has already laughed off a cease and desist missive from the singer/actress over his planned satire documentary How I Married Jennifer Lopez: The J.Lo and Ojani Noa Story.
He is under a legally-binding agreement not to reveal details of the couple's late 1990s union, but insisted last week (begs26Oct09) the film does not breach the agreement because it is "a 100 per cent parody".
The star is now fighting the release of an 11 hour tape featuring real-life footage that was shot by Noa - who now owns the copyright.
According to the National Enquirer, scenes in the film include Lopez looking at her figure in the mirror wearing a bra and panties, and another of the star in a heated argument with her mother Guadalupe.
Filmmaker Ed Meyer, Noa's partner in the business venture, tells the tabloid, "J.Lo doesn't want her fans to see these videotapes because they show she's not the person you think she is... these tapes show how she was in love with Ojani and what a wonderful sex life they had together."
Lopez's attorneys have already successfully blocked Noa's plans to release a tell-all book about his courtship and one-year marriage to the pop star.
Noa, a former waiter, and Lopez were married for a year from 1997 to 1998. Noa also worked briefly as the manager of his ex-wife's California restaurant Madre's.