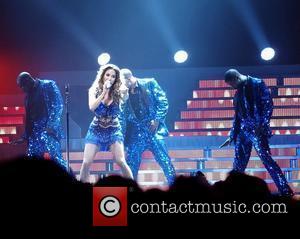 Jennifer Lopez only said goodbye to American Idol a couple of days ago, but the superstar singer is already having a say on who should replace her. Though the likes of Fergie, Miley Cyrus and Katy Perry have all been tipped as possible judges, Lopez appears to be thinking, well, older. A lot older.

During her appearance on Good Morning America this week, the 42-year-old hinted that the departure of Steven Tyler had played a part in her wanting to leave the show, saying, "We had a little bit of magic.I don't know, with him gone, it might be a different formula". However, when quizzed on who she'd like to see replace herself and Steven, Lopez said, "I think like Bono or Bon Jovi or Mick Jagger.You know me, I think big". The U2 and Rolling Stones men are almost certainly out of the question, though Bon Jovi is a little more plausible, despite still being one of the richest musicians in the world. Speaking on Ryan Seacrest's radio show, American Idol creator Nigel Lythgoe appeared to be at sixes and sevens as to finding a possible replacement. He said, "There are so many names coming at me at the moment.I joke about it and say, 'Oh, I'm looking for the Three Stooges or Jerry Lewis.' But at the end of the day, I think what we've seriously got to talk about is just using people for a year". Lythgoe suggested that short term contracts could be the future, given that the bigger stars still want to honor their touring and recording schedules, the first of which makes most stars huge money. The Idol bosses admitted that he was "really upset" by Lopez and Tyler's decisions to leave, though he ultimately understood and respected their wish to return to the music industry.

Aretha Franklin appears to have thrown her hat into the ring for a possible judging spot, though the Queen of Soul is unlikely to connect with American Idol's relatively young demographic as much as somebody like Miley Cyrus, or Katy Perry.