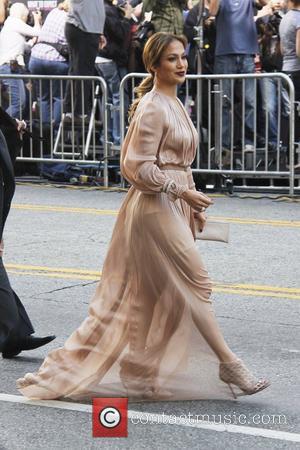 Picture: Jennifer Lopez The Los Angeles Premiere of 'What to Expect When You're Expecting' - Outside Arrivals Los Angeles, California - 14.05.12

With the latest season of 'American Idol' drawing to a close, the question on everyone's lips has not been who would win the contest, but what will happen to the show's highest-paid judge Jennifer Lopez, the singer and actress continuing to drop hints that she might be off after three season with the program.
People magazine reports that Lopez latest tease came on The Ellen DeGeneres show in which she told the amiable host an honest "I don't know" in answer to the question of whether she would be returning next year. "I enjoy it. I really do enjoy it," she continued, adding, "I miss doing other things. It really does lock you down." Lopez has been in a six month relationship with Casper Smart, and her twin children Max and Emme are now four years-old; "Now they're getting more mobile. They're about to go to school" she pointed out.
Lopez dithering comes as the UK's Daily Mail newspaper reports that Cheryl Cole has been forced to deny rumours that the show has approached her to replace Lopez should the star leave. Such a move would be a major two fingers up at 'X Factor' mogul Simon Cowell from 'Idol' boss Simon Fuller and Cole herself - although how bothered he'd really be, having replaced her from the US 'X Factor' mid-series,' is probably up for discussion.