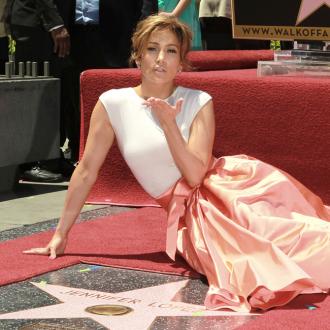 The 'On The Floor' hitmaker was joined by her five-year-old twins, Max and Emme, boyfriend Casper Smart, 'Monster-in-Law' co-star Jane Fonda and music collaborator Pitbull as her star was unveiled in recognition of her musical accomplishments.

An emotional Jennifer - who was dressed in a Dior dress and Brian Atwood shoes - paid tribute to her fans, saying: ''I love you, thank you so much for going on this journey with me. This landmark moment inspires me to work harder and dream bigger for all that is the future. I hope you feel as I do that it was all worth it, and I hope that I have touched your hearts even in a small way.

''I really am overwhelmed. This all feels, I don't know, kind of surreal, but so real. It's awesome.''

Jane praised Jennifer's hard work and talent, saying: ''She should have an entire block of stars. In my opinion, she's only scratched the surface of what she's capable of.''

Gregory Nava, who directed Jennifer in 'Selena,' called her ''the hardest worker I have ever known''.

He said: ''We made a couple of movies together and when I directed `Selena,' - she rocked the world when she played `Selena.' Jennifer said to me, `Greg, I'm gonna become the first Latina superstar. I'm gonna have a number-one movie and a number-one record at the same time.' And I said, `Impossible, nobody does that.' Yeah. Impossible for everybody but Jennifer.''