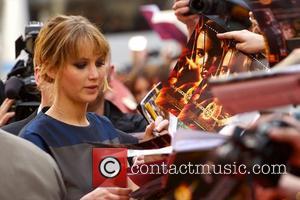 Jennifer Lawrence has revealed her desire to play Bridget Jones - the ditsy thirty something woman character portrayed by Renee Zellweger in the hugely popular movies. Lawrence's Hollywood stock has skyrocketed after her latest movie The Hunger Games grossed a reported $155 million at the box-office last weekend.
Speaking to the German issue of Interview magazine, Lawrence, 21, said she would love to play the famous British singleton, saying, "I have always wanted to play Bridget Jones.That's the movie I put on when I am homesick, although England is not my home. When you're feeling 'bleh' and you want a movie that you're never bored of watching, Bridget Jones is that for me so it's natural to say that I want to be Bridget Jones". However, the actress said she would "never" want to replace Renee Zellweger, who has reportedly signed on for a third movie in the franchise, tentatively titled 'Bridget Jones's Baby'. The movie, also starring Colin Firth and Hugh Grant, is being penned by award-winning author David Nicholls, though a release date is yet to be confirmed.
The three Hunger Games movies are likely to make Lawrence one of the most popular young actresses in Hollywood, and potentially one of the richest. However, when pushed on what she'll do with her expanding bank balance, Lawrence said, "When I get my first real cheque, I want to bathe in a pool full of pasta".