After winning an Oscar for Silver Linings Playbook and being nominated the next year for American Hustle, Jennifer Lawrence reunited with filmmaker David O. Russell for a third time on the biopic Joy.

"It's fascinating and terrifying working for him because he's a mad-scientist genius," she explains. "He's inspired by anything." Lawrence isn't remotely bothered by Russell's reputation. "I always see the wide eyes of people who've never worked with him before," she laughs. "I tell them, 'You have to let go of all your s--t.' Working on his sets is like the Olympics of acting. Everything moves so fast. It's like watching someone do a giant abstract painting or sculpture and you go, 'Where is this going?' And then all of a sudden you're like, 'Oh, it's a pegasus. It's beautiful!'" 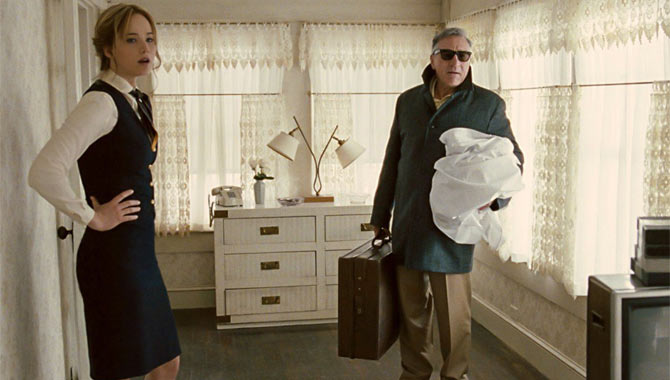 She was on the set of The Hunger Games when she had a 4am phone call from Russell asking if she wanted to play the woman who invented the Miracle Mop. "From that seed he went off into David land," she says, "and it developed and changed, and now it's a completely different story. Usually it's about the fight on the way to success and the happy ending. David goes on to tell the struggle that comes after that, along with all the sacrifices that come with finally getting what you want."

When it came time to shoot the film, Lawrence had to practice to get comfortable with the Miracle Mop. But she got a surprise when she shot the scene in which she demonstrates the mop for QVC founder Neil Walker (Bradley Cooper), "Bradley watched me and he was like, 'No, no, no, Jen, that's not how you mop!' And he showed me how to properly mop. It turns out that his mom watched QVC every day. I mean, he knew all about that world and I knew nothing."

But the most stressful thing about shooting the film was the fact that everything takes place in the dead of winter. "I still have 'snowst' traumatic stress," she laughs. "I felt like I was in Game of Thrones, running around going, 'Winter is coming again!'"

Watch the trailer for Joy here: