Jennifer Lawrence Is Scared Of Ghosts

Jennifer Lawrence admits she is scared of Ghosts, and reveals she wants to spend her 'Hunger Games' pay check on a bath full of pasta. 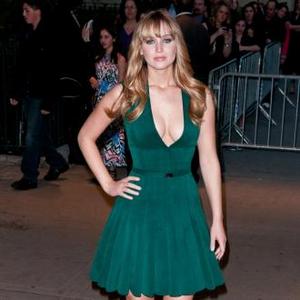 Jennifer Lawrence is scared of Ghosts.

The 21-year-old 'Hunger Games' actress admits she is terrified of catching a glimpse of a super-natural being.

She said: ''I'm scared of ghosts. Just yesterday when I moved into a new room at the hotel, I was deeply convinced, that I shouldn't wash my face, because if I would look into the mirror, I would actually see a ghost.''

Meanwhile, she is planning to spend her paycheck from the movie - rumoured to be in the region of £313,000 - on huge quantities of her favourite food - pasta.

The Oscar-nominated star told Germany's Interview magazine: ''When I get my first real check, I want to bathe in a pool full of pasta.''

Talking about her own on-screen idols, Jennifer admits she would love to be like hapless singleton Bridget Jones, and says she would jump at the chance to have a crack at the role made famous by Renee Zellweger.

She told DIY.com: ''I've always wanted to play Bridget Jones. I want that movie to not exist so I can play it!

''I've always felt that way - I got nominated for an Oscar, I'm going to replace Renee Zellweger.

''I say that because that's the movie you put on whenever you're homesick, even though England's not my home. You know when you just want that movie you never get sick of watching? Bridget Jones is that for me.''