Jennifer Lawrence is once again growing close to her ex-boyfriend Nicholas Hoult, following her split from Coldplay frontman Chris Martin. 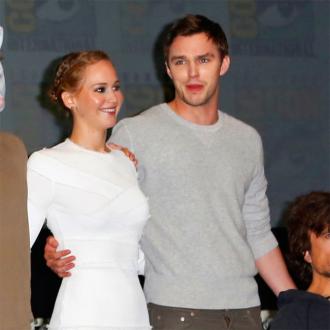 Jennifer Lawrence is growing close to her ex-boyfriend, Nicholas Hoult.

The 'American Hustle' actress broke up with the 24-year-old star over the summer, but following a short-lived romance with Coldplay frontman Chris Martin, 37, the star has got back in touch with her former flame.

A source revealed: ''He still adores Jennifer and so do his family.

''He's been calling her and they've been speaking regularly on Skype.''

Jennifer was in the UK earlier this week to promote 'The Hunger Games: Mockingjay - Part 1', and is rumoured to have spent her free time visiting the 'X-Men' star's parents at their family home in Berkshire, south east England, who are keen for the couple to reunite.

The source added to the Daily Star newspaper: ''Their relationship is getting closer and his family would love for them to get back together.''

Last month, it was reported the actor - who shot to fame as a child star in 'About A Boy' - had been cosying up to Robert Pattinson's ex, 'Twilight' actress Kristen Stewart, but it seems romance could be back on the cards for Nicholas and Jennifer with the pair set to appear alongside each other when they begin filming 'X-Men: Apocalypse' next year.

The source said: ''They fell in love making 'X-Men' so it has a lot of significance for them.

''Both Jen and Nick are looking forward to spending time together again.''

The revelation follows a scary moment for the blonde beauty after an appearance on 'The Late Show with David Letterman' in New York on Wednesday (12.11.14). The star was signing autographs for fans when an eager bunch trampled barriers protecting her. Thankfully, security was on hand to whisk her to safety before any harm could be done.