'American Hustle' costume designer, Michael Wilkinson, was forced to make a number of dresses for Jennifer Lawrence as she stained her white dress with Doritos!

For most of us, white dresses tend to be avoided due to the catastrophic stains which inevitably and quite magically appear all over the material and which are, quite inexplicably, impossible to scrub out. Fortunately, we're not the only ones and even the terribly glamorous and confident Jennifer Lawrence is not immune from destroying her wardrobe, even on a film set.

The cast of American Hustle, Jennifer Lawrence's pristine white dress can be seen on the far right.

Lawrence's white dress in American Hustle was the victim of Doritos stains and on more than one occasion. As a result, the film's costume designer Michael Wilkinson was forced to make a number of dresses for the clumsy star. Wilkinson, who is nominated for an Oscar for his work on American Hustle, was recently interviewed by Vanity Fair and he joked about Lawrence's junk food habits. He said "Jennifer Lawrence is a very, let's say, raw and intuitive young lady, and she's not against eating Doritos and snack food in her costume. So we were glad that we had a couple [of backups]."

Wilkinson claimed the dress was of crucial importance to creating the feel of the 1970s, the era in which the film is set. However, Doritos producers, Frito-Lay, claim the difficulties Lawrence faced with her white dress were "factually accurate." A spokesperson for the company, speaking to Elle, said "Back in the seventies that would have been the experience consumers would have had with eating Doritos, so technically, it would have been factually accurate to have that Doritos cheese problem."

Lawrence appears in American Hustle as Rosalyn Rosenfeld, the wife of Christian Bale's character. Bradley Cooper (The Hangover), Amy Adams (Superman: Man of Steel) and Jeremy Renner (The Bourne Legacy) also star in the film. American Hustle focusses on Irving Rosenfeld (Bale) a con-man who is forced to work with an FBI agent in the corrupt underground world of New Jersey's mafia.

American Hustle was released in the US in December and is still in UK cinemas.  The film has garnered positive reviews, including a 5 star review by Contactmusic critic Rich Cline. 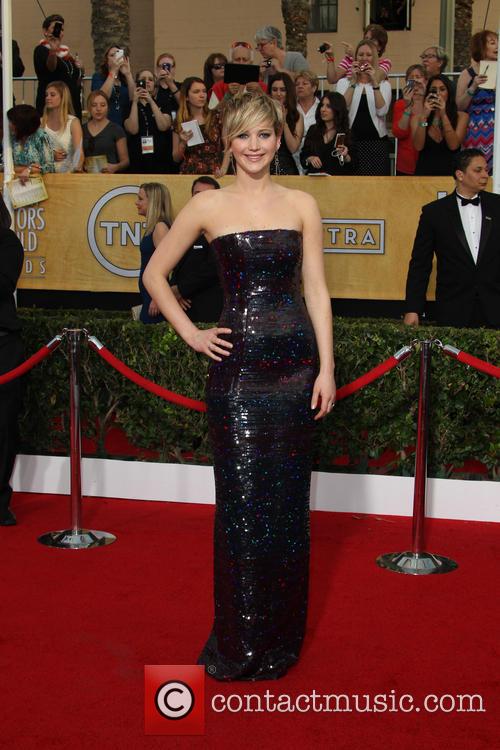 Jennifer Lawrence in a more Doritos friendly frock at the Screen Actors Guild.