Jennifer Lawrence Was Left Frantically Clutching Her Chest On The Red Carpet On Wednesday (04nov15) After Donald Sutherland Stepped On Her Dress And Pulled The Plunging Neckline Embarrassingly Low. 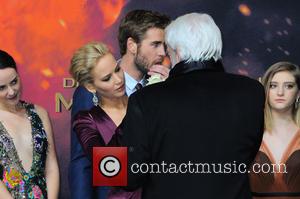 The actress arrived at the world premiere of the new Hunger Games film, The Hunger Games: Mockingjay - Part 2, in Berlin, Germany wearing a low-cut purple gown.

However, the stylish look went awry when her co-star, acting veteran Donald, accidentally trod on the train of her frock. Pictures show Jennifer holding her hand over her right breast as she crouches down to pull the material free.

Other snaps appear to show a concerned Donald making sure the actress is covered up.

The pair was joined by castmembers including Liam Hemsworth, Josh Hutcherson, Julianne Moore and Natalie Dormer for the screening of the final film in the franchise at Berlin's Sony Centre.

Jennifer recently admitted she is dreading letting go of her character, Katniss Everdeen, when she finally finishes promoting the fourth installment, which is due for release this month (Nov15).

"I didn't really feel like I said goodbye to her (when filming ended)," she told Collider.com. "It's funny, that's what we do on every movie. We develop these characters and, a few months later, we never see them again. I guess I'm used to that, so I didn't really feel it so much, character wise, at the end of Hunger Games.

"I think it will be pretty bizarre when the movie is finally out and we've finished this press tour and everything is officially done. I think that's going to be a pretty weird feeling, just on a personal level. These movies have been my life for so many years."