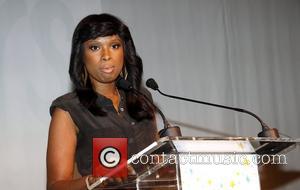 Jennifer Hudson 's Independence Day performance in Boston yesterday (July 4, 2012) was cut short, because of a storm that threatened to hit the area where the concert was being held. Ace Showbiz reported on the unfortunate incident, which prevented Hudson from performing her second planned set in front of the patriotic crowds.
Luckily for Hudson, she did get to perform her first set at the Boston Fireworks Spectacular for their 39th annual Independence Day celebrations. She treated the audience to renditions of 'Feeling Good' and 'And I Am Telling You' during the concert, which took place at the Charles River Esplanade. Boston Pops Orchestra then had to cut short their set as the area was evacuated, meaning that Hudson was also unable to return to the stage. According to the report, it was not raining on the esplanade at the time that the evacuation took place but officials were concerned at reports of the storm, which resulted in two people being struck by lightning in South Boston. Around 30 minutes after the area had been evacuated, concertgoers were allowed back onto the esplanade and the fireworks display went ahead as expected.
The concert was hosted by the Emmy award-winning actor Michael Chiklis, star of The Shield. It's the second time that he has carried out the honor of hosting the Independence Day celebrations in Boston, which were televised by CBS.