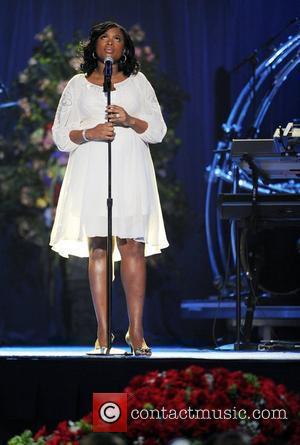 Picture: Jennifer Hudson The memorial service for the King of Pop, Michael Jackson, at the Staples Center Los Angeles, California - 07.07.09

New mum Jennifer Hudson is to be an aunt - her sister is pregnant.
The happy news comes almost a year after a family murder tragedy, in which Hudson's sibling Julia lost her seven-year-old son Julian.
The boy was shot and dumped in the trunk of an abandoned car on the outskirts of Chicago, Illinois.
The Oscar winner's mother and brother were also killed in the 24 October (08) killing spree. William Balfour, the estranged husband of Hudson's sister, has pleaded not guilty to charges of first degree murder and home invasion.
Hudson gave birth to David Daniel Otunga Jr. last month (Aug09) and now insiders tell Star magazine that Julia is four months pregnant.
The source tells the publication, "When Julia found out, she called Jennifer right away. They're both ecstatic.
"They know they can never replace Julian, but this new baby has brought the family a lot of joy."