Jennifer Hudson led tributes to Whitney Houston at the Grammy Awards last night (12.02.12), performing her hit 'I Will Always Love You'. 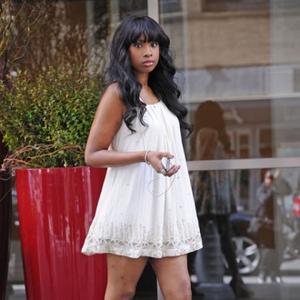 The 30-year-old singer gave a simple but moving rendition of one of Whitney's biggest hits, 'I Will Always Love You', at the ceremony, while many other stars paid tribute after the Discovery of the singer's body at the Beverly Hilton Hotel. No official cause of death has so far been given.

Chaka Khan - who Whitney had sang backing vocals for at the beginning of her career - had also been set to join Jennifer on stage for her performance, but pulled out to grieve privately.

She tweeted: "As I grieve the loss of my friend and 'little sister,' I don't feel it appropriate to perform at this time. Continue to pray for the family."

Host LL Cool J explained to the crowd how the show's organisers had decided how to pay tribute to Whitney, saying: "We were up all night, and we just wanted to figure out and show Whitney Houston the love, the appreciation, the love, the respect she deserves based on her as a human being and the career that she had and give her that love and make sure that people know we care."

The awards themselves were dominated by Adele, who took home six awards including the coveted Album of the Year for '21'.

Upon collecting the trophy, she said: "I just first want to say 'Mum, girl did good. It's been the most life-changing year."

Adele, 23, also thanked doctors who had operated on her vocal cords last year in order to save her voice.

Singer Dave Grohl said: "This is a great honour because this record was a special record for our band. Rather than go to the best studio, we made this one in my garage with some microphones and a tape machine.

"It shows that the human element of making music is what's most important."

Kanye West had the most nominations of any artists ahead of the ceremony - which was held at Los Angeles' Staples Center - with seven, and won four including Best Rap Album for 'My Beautiful Dark Twisted Fantasy', and Best Rap Performance for his duet 'Otis' with Jay-Z from their 'Watch The Throne' album.

Record of the Year: 'Rolling in the Deep', Adele

Song of the Year: 'Rolling in the Deep', Adele Adkins & Paul Epworth

Country Performance by a Duo or Group: 'Barton Hollow', The Civil Wars