Jennifer Garner always ensures her beauty products contain SPF after ignoring the dangers her skin risked from sun damage when she was growing up. 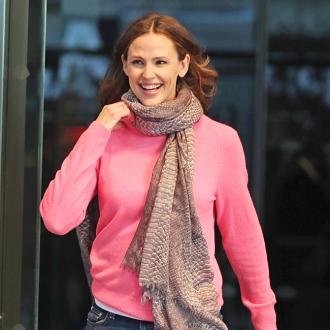 The 40-year-old actress, who is currently the face of skincare giant Neutrogena, looks for skin protection in everything she uses after ignoring the danger of sun damage when she was growing up.

She told PEOPLE: ''When I was really young, no one thought of the sun as being a problem. We would put on baby oil and lay in the sun to try to get brown.

''[These days], right after brushing my teeth and washing my face, I put on sunscreen immediately. It has to be in my moisturiser, in my make-up.''

Jennifer admitted while she loves dressing up for awards season, which her husband Ben Affleck departed from victorious this year thanks to his film 'Argo', she relies on the Neutrogena's wipes to help her skin breathe after a long night out in heavy make-up.

She added: ''There would be nights where we would get home so late for me, like 3.30, 4 in the morning. When you've been wearing that much make up for that long, you absolutely have to get it off your skin.

''There were a couple of nights where I used the Neutrogena make-up remover wipes ... worst case scenario, that's the way to go!

''I had a blast, but I was certainly fine with just going back to washing my face, a little sunscreen in my moisturiser and putting my hair in a ponytail.''