Jennifer Garner wants to return to making action films after her personal trainer suggested it was ''time'' to give the genre another go. 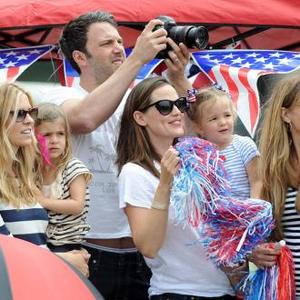 The 'Juno' actress - who shot to fame as CIA agent Sydney Bristow in TV crime drama 'Alias' - is hoping to give the action genre another go following a lengthy stint in romantic comedies after her personal trainer suggested she put her stunt skills to good use again.

Jennifer excitedly told E! Online: ''Do I think there will be a return to the action? I hope so!

''Yes! I was just working out with my trainer this morning, and she's trained me for 12 years and she was like, 'I think it's time.

However, Jennifer isn't optimistic about the possibility of a big-screen adaptation of the hit action-packed ABC show.

The 40-year-old beauty is currently starring in magical tale 'The Odd Life of Timothy Green' opposite Joel Edgerton, about a childless couple whose wish comes true when they are granted mysterious boy Timothy.

Jennifer - who has children Violet, Seraphina and five-month-old Samuel with Ben Affleck - confessed that her favourite scene in her new film is: ''The soccer scene, because I haven't been that mom on the sidelines yet but I think I could get there.''