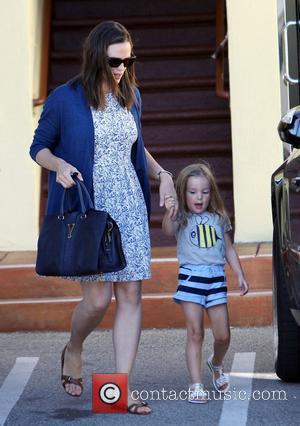 Picture: Jennifer Garner and her daughter Seraphina Affleck out and about in Santa Monica Los Angeles, California - 08.07.12

Jennifer Garner is losing weight surely but steadily after giving birth to hers and husband Ben Affleck's third child five months ago, and in an interview recently given with a UK print magazine, a source close to the actress said she was in no rush to shift the baby weight, insisting that she wasn't going to obsess about it like others might.

"Jen isn't bothered about getting thin in record time like other celebs", the source tells Closer, "she's taking it slowly and not obsessing" they added. The pressure on Hollywood actresses to get back into shape post-pregancy as quickly as possible is huge given the demands of their job, but apparently the 40 year-old is refusing to get dragged into a race over it. Besides, she has been doing well regardless: "She has lost 21 pounds since the birth, taking her to 133 pounds", "But she says she has a few more pounds to go."

Garner's weight loss regime reportedly includes exercising three times a week and attending pilates classes. However her children come first, and she'll forgo classes if she'd needed by her family. And she's not adverse to rewarding herself with a few treats either. "[She] will allow herself spaghetti and meatballs," Jennifer also allows herself a sweet treat after meals "and she enjoys a piece of dark chocolate after meals" said the source.