Jennifer Garner has flown to London with Ben Affleck to support him at the BAFTAs on Sunday (10.02.13) 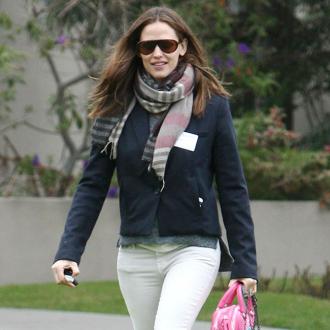 Jennifer Garner has jetted to London with Ben Affleck for a romantic BAFTAs break.

The 'Butter' actress has taken advantage of the opportunity to enjoy a rare overseas trip away alone with her 'Argo' star husband and left their three children at home in Los Angeles to accompany him to the UK and support him at the ceremony on Sunday (10.02.13), where his movie is nominated for seven awards.

Ben recently praised his wife as the ''best person in the world''.

The 40-year-old actor - who shares three children, Violet, seven, Seraphina, four, and Samuel, 11 months, with his actress wife of eight years - previously revealed he still can't believe Jennifer married him and said the secret to a successful marriage is choosing someone who is out of your league.

He also admitted his wife was ''cool'' with his hectic schedule and says he appreciates how she stays up late waiting for him to come to bed so they can brainstorm ideas about whatever new film he's working on.

He explained: ''My wife is very cool. She knows that directing is consuming in that way. She's just happy I come home. Usually, I come home after the kids are in bed anyway. We like to chat for a little bit and l'll talk about the movie and what I'm doing, what I'm thinking or whatever. She's a good sounding board.''

'Magic Mike' star Channing Tatum and his pregnant wife Jenna Dewan-Tatum were also spotted arriving in London together ahead of the glitzy ceremony.