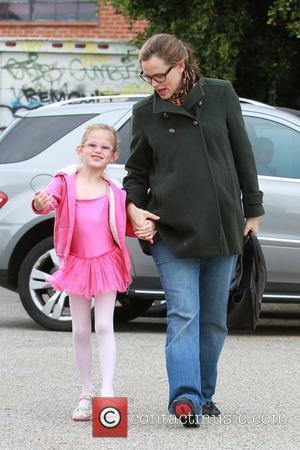 Picture: Pregnant Jennifer Garner and daughter Violet Affleck are seen in good spirits on their way back from ballet class Santa Monica, California - 14.01.12

However if her daughters' names Violet, 6, and Seraphina, 3, are anything to go by, we are expecting a shock. Talking on 'The Tonight Show' on Wednesday (18 Jan 2012), she said: 'Our girls are working on names. At first they were definitely Disney. It was like, Donald Duck, Minnie Mouse Affleck. "And then they've moved on. Then it was Peter Pan, Captain Hook, Smee. They're coming up with lists and coming in and saying, 'Let's have a baby-naming contest! Let's have a baby-naming poll! They ask everyone, because they just want to know. But we're not telling.' Garner further suggested that she knows the sex of the baby but will not reveal it. She has previously spoken on The Jay Leno Show, suggesting that she's hoping for another girl, but Affleck doesn't feel the same way: 'I would have thought [he wanted a boy]. At first I think I really thought so. And then he kind of said, 'Well, we have girls. We know how to do girls. My girls love me. I'm the big guy in the house.' So, now I'm not sure.'

Jennifer Garner, who announced her third pregnancy in August, is due in late February/early March. Garner is set to appear in 'The Odd Life of Timothy Green' later this year.