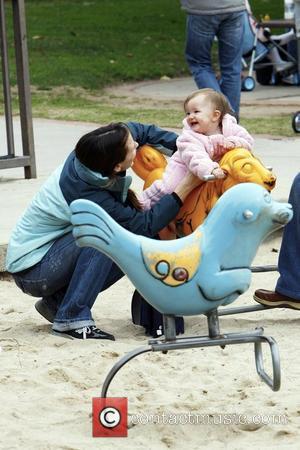 Picture: Jennifer Garner spends the day at a park in Brentwood with her daughter Seraphina and family. Los Angeles, California - 26.12.09

Jennifer Garner felt less of a paparazzi target living in Boston, Massachusetts, because the photographers there were so discreet, she never knew when she had been snapped.
The Hollywood star and her husband Ben Affleck relocated from Los Angeles to the East Coast over the summer (09) while the Pearl Harbor actor worked on two new movies in his childhood state.
Garner admits she fast became a fan of life in Boston because their daughters Violet, four, and Seraphina, 11 months, were unaware they were ever being photographed.
She tells W magazine, "There were fewer of them, and they hide behind things, so my kids aren't aware of them, which makes all the difference in the world. (In L.A.) if I try to go to the supermarket, the police come (to escort her)."
But Garner concedes she and Affleck will never be able to lead a normal life away from the spotlight.
She says, "We talked forever about leaving Los Angeles, but anywhere you go some dodo is going to buy a camera and start following you."