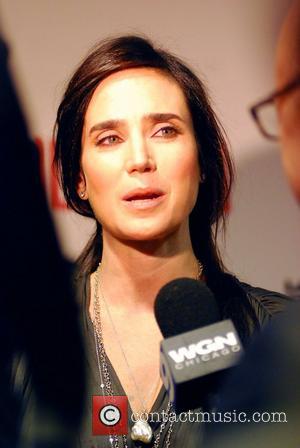 Jennifer Connelly, the American actress and star of 'Dark City' and 'Requiem for a Dream' recently appeared on the 'Late Show with David Letterman' where she spoke about the "bouts of nausea" she's experienced since becoming pregnant with her third child. The 40-year-old is currently on a promotional tour for new movie 'The Dilemma' and she showed off her baby-bump at the film's Chicago premiere last Thursday (6th January 2011).
Connelly, who is married to the British actor Paul Bettany, noted that the early stages of her pregnancy were the worst, saying, "The first three months were no fun. It was sketchy, like cell phone service sketchy. I have to stand in one spot in my apartment to make a phone call. It was like that with the nausea", before adding, "I had to stand in one spot, which happened to be in front of my refrigerator, which was open, with me dipping pretzels in cream cheese and stuffing them in my mouth. If I did that, I was good". The actress married 'Da Vinci Code' star Bettany in Scotland back in 2003 and the couple welcomed their first child together the same year. Connelly has a previous son named 'Kai' from her relationship with the photographer DAVID DUGAN.
Connelly recently completed work on the forthcoming comedy-thriller 'Salvation Boulevard' which also stars Marisa Tomei, Pierce Brosnan and Greg Kinnear.