Actress Jennifer Carpenter Has Confirmed Rumours She's A Mum After Quietly Giving Birth To Her First Child With Her Musician Fiance Seth Avett This Past Spring (15). 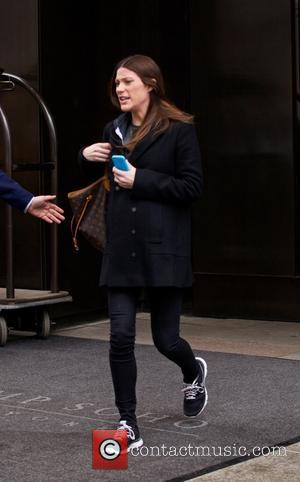 The former Dexter star initially sparked rumours she and The Avett Brothers star were engaged and preparing for a baby after she was spotted sporting what looked like a growing baby belly and wearing what appeared to be an engagement band on her left ring finger in February (15), and her representative confirmed the pregnancy news, but neither star addressed the news.

At the Television Critics Association summer press tour in Los Angeles on Monday (10Aug15), Carpenter opened up about the difficulties of filming the TV adaptation of Bradley Cooper's film Limitless while carrying a child.

And she confirmed that Avett is indeed her fiance.

Revealing she was over eight months pregnant while shooting the pilot in March (15), the actress told reporters the toughest part of filming was "ignoring my current circumstances of being eight and a half months pregnant... and asking everyone else to pretend that stomach wasn't there."

She added, "We have an incredible costume designer. He worked miracles. I'm actually wearing something in the second episode that we tried to wear in the first around my pregnant belly."

And she admits director Marc Webb created magic with camera angles and "people crossing at the right time".

The new mum also recalled her first conversations with the new programme's producers when she realised she'd be filming while pregnant, stating, "I got the script and I thought, 'I just want to throw my hat in the ring knowing my odds of getting it in my condition were next to none'. I sent it (audition tape) in with an apology if I'm being totally honest... So when my manager called and said, 'They'd (producers) like you to do it...' I don't know..."

This is the first child for Carpenter and Avett, who began dating in 2013. She was previously married to her Dexter co-star Michael C. Hall; their three-year union ended in divorce in 2011.

Dexter Star Fears She's About To Be Killed Off