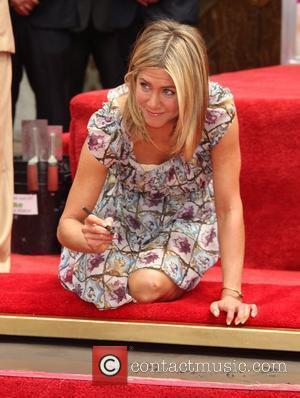 Picture: Jennifer Aniston is honoured with a Hand and Footprint Ceremony outside Grauman's Chinese Theatre, while her boyfriend looks on from the front row Los Angeles,...

Jennifer Aniston's role as a maniac dentist in her new movie 'Horrible Bosses' looks set to draw in the audiences over the weekend, with some reports suggesting the film could make $25 million in just three days. Aniston's much-hyped comedy is expected to perform well at the box-office when it opens in around 3,040 cinemas.
According to TheWrap, Horrible Bosses should have surpassed $25 million in ticket-sales come Monday, with the Kevin James comedy 'The Zookeeper' thought to be its only rival 'opening'. Paramount's 'Transformers: Dark of the Moon' should comfortably win the weekend's overall box-office with around $40 million, but the movie has dominated since its official opening last weekend. Other limited openings this weekend include 'Project Nim', the Terrence Howard thriller 'The Ledge' and hip-hop documentary 'Beats, Rhymes & Life'. 'Horrible Bosses' is the movie creating the most buzz heading into the weekend and has already received solid reviews, scoring an 81 per cent rating on Rotten Tomatoes. The film stars comedy favourites Jason Bateman and Jason Sudeikis alongside Hollywood stars Colin Farrell and Kevin Spacy.
Jennifer Aniston has signalled her intentions to take a brief hiatus from Hollywood following the release of 'Horrible Bosses'. She is likely to begin working on the script to her long-time project 'The Goree Girls'.