Jennifer Aniston says she was friends with Justin Theroux before they started dating and insists they didn't get together on the set of their new film 'Wanderlust'. 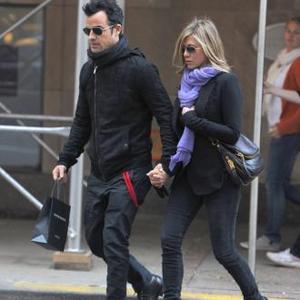 Jennifer Aniston says she was friends with Justin Theroux before they started dating.

The 43-year-old actress has been romancing the actor for around 10 months but insists rumours they got together on the set of their new film 'Wanderlust' are false as they didn't become a couple until shooting had wrapped.

Jennifer admits she's smitten with Justin - who broke-up with his long-term girlfriend to start a relationship with the former 'Friends' star - as he's talented as well as a nice guy.

During an appearance on TV show 'Good Morning America', she said: ''He is really cute. He is great - he's a great actor.''

While she didn't find romance on the set of 'Wanderlust', Jennifer enjoyed every minute of filming because she could be anonymous as it was in Georgia.

The screen beauty - who was previously married to Brad Pitt - said: ''The main thing that was so refreshing for me was being in Clarksville, Georgia. You felt this weight lifted off of your shoulders.

''No being on guard and looking over your shoulder - 'Who's that over there, who has a cell phone?' The anonymity was regained and I loved it.''