Jennifer Aniston is reportedly going to take Justin Theroux's surname when they tie the knot and are said to be planning their wedding for when Jennifer finishes shooting her current film on March 8. 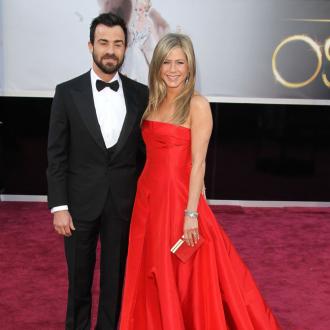 The former 'Friends' actress got engaged to her 'Wanderlust' co-star last August after he proposed to her on his 41st birthday (10.08.12) and Jennifer is said to be so smitten with her fiancé that she plans to change her trademark name to show the world how much she loves him.

A source revealed to People magazine: ''She plans on privately changing her name to Theroux. She likes the way it sounds and jokes that [Jennifer Theroux] sounds very posh. They really seem to have perfect chemistry, like they complete each other.

''There's a perfect balance. He was doting when she turned to him [at the Oscars], but the overall vibe was simply fun and effortless. [Jen] is crazy about Justin and can't wait to be his wife. Jen seems more confident than ever and they've become a great team.''

Jennifer, 44, and Justin, 41, are allegedly hoping to tie the knot shortly after the screen beauty finishes working on her latest film, currently known as the 'Elmore Leonard Project', in Connecticut on March 8.

The couple have even designed their own wedding bands to make the ceremony more personal.

The source added: ''It will be a small affair with their closest friends.''

Jennifer - who was previously married to Hollywood heartthrob Brad Pitt, who is now engaged to Angelina Jolie - thinks life couldn't be ''better'' now Justin is in her life.

The insider said: ''Jen was always very grateful for everything that she had. But now life could not be better. And she deserves all the happiness in the world.''