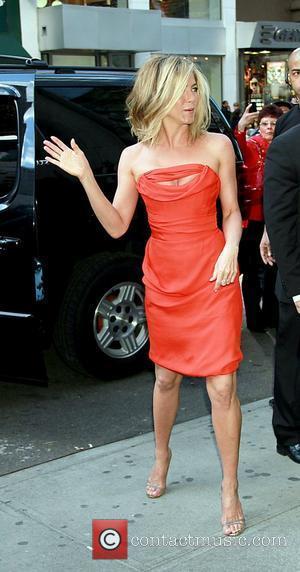 Jennifer Aniston, the American actress currently dating screenwriter and actor Justin Theroux, has showed off her first tattoo, reports People Magazine. Jennifer Aniston debuted her new ink in New York on Friday (24th June 2011).
The actress' first tattoo sits on the inside of her right foot and reads 'Norman' - the name of her beloved dog who recently passed away. The 42-year-old became teary eyed when discussing the Welsh corgi-terrier during a taping of Bravo's 'Inside the Actors Studio' on Thursday. Aniston was often photographed running on the beach with the dog, but Norman passed away in May aged 15-years-old. A long-time dog lover, the actress spoke in detail about her pet with Allure Magazine, saying, "Really, the most unconditional form of love that you can encounter is with a dog. They're excited the minute you come home, and they show the same amount of excitement every day. They're loyal, and they're always, always faithful". She also famously appeared with Norman during an interview on the Chelsea Handler show, telling the host, "Even back as a puppy he was as cool as a cucumber. He's just a person in a dog suit".
Jennifer Aniston stars in Seth Gordon's new comedy movie 'Horrible Bosses', alongside Jason Bateman and Colin Farrell. The film is set to hit cinemas on 8th July 2011.