Jennifer Aniston Gets Back To Work With She's Funny That Way

After she surprised everyone by getting married to Justin Theroux on August 5th, Jennifer Aniston was back on the red carpet this week in for the premiere of her new comedy She's Funny That Way. This was her first public appearance after the couple's wedding and honeymoon in Bora Bora. Theroux was also back at work this week, heading to Texas to shoot the second season of The Leftovers. 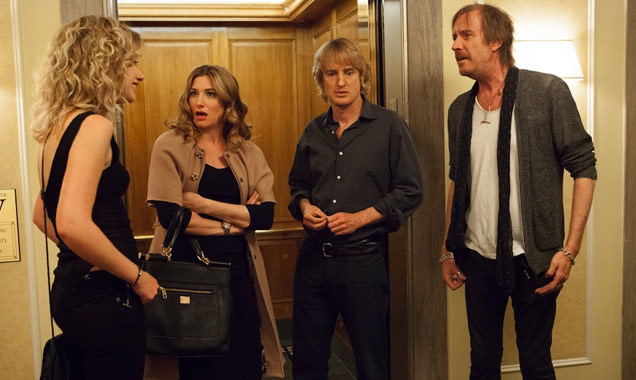 Aniston and Theroux even kept their wedding a secret from their guests, who thought the event was Theroux's birthday party. "And it was," Aniston says, matter-of-factly adding that she managed to keep the marriage part of the day out of the news because, "Where there is a will, there is a way."

More: Read our review of She's Funny That Way

In She's Funny That Way, Aniston plays Jane, perhaps the least sympathetic therapist ever. "I just think Jane is a little off," Aniston laughs. "She's not quite right in her head. She's kind of impatient with people's faults and their problems."

Watch the trailer for She's Funny That Way here:

While she loved the character, the real draw on the project was the chance to work with legendary filmmaker Peter Bogdanovich. All it took for her to sign on board was one conversation. "I spoke to Peter and that was it," she says. "I really feel that this is a special experience. He's just a legend. And I feel privileged to be a part of this. They just don't make movies like this anymore. This is a beautiful throwback to the old days, fun and really fast."

Intriguingly, Bogdanovich once acted in a film that Theroux was directing, the 2007 comedy Dedication. "I played a small part, and he was a very good director and a nice guy," Bogdanovich recalls, going on to add his best wishes. "I'm very fond of her, and Justin is a terrific guy. I wish them a happy life."