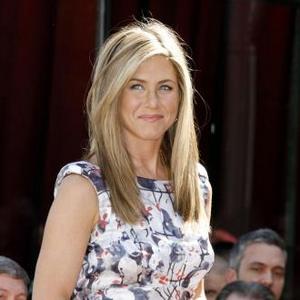 The 43-year-old actress was thrilled when boyfriend Justin Theroux proposed to her on Friday (10.08.12) and she couldn't be happier with the actor-and-screenwriter's choice of jewellery for her.

A source told Life & Style magazine: ''It's a huge emerald-cut diamond. It's a rectangle with tapered diamond baguettes on the sides. It's beautiful.

''Just after Jen got engaged, she called all her friends and told them about it. She was so happy and said she loves The Ring. I think she was overwhelmed and overjoyed by the size and beauty of it!''

The couple have been friends for years but only started dating after filming the movie 'Wanderlust' together.

This will be 43-year-old Jennifer's second marriage; she was previously wed to Brad Pitt for five years until they divorced in 2005.

Justin previously dated Heidi Bivens for 14 years before beginning a relationship with the former 'Friends' star.

While Jennifer prefers not to comment on her romantic relationships, she has previously called Justin her ''protector'' and admitted he has had a massively positive impact on her life.

She said: ''He's a protector, for sure. He's just a good human being and so funny.''

Jennifer recently bought a $21 million home in Beverly Hills for the couple to live in.

The property, which comes with its own vineyard, is currently being refurbished before they move in.