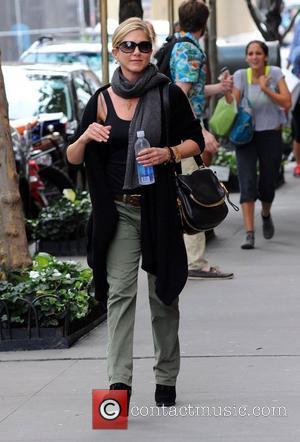 Jennifer Aniston and Reese Witherspoon reunited backstage at Elle magazines annual 'Women in Hollywood' event in Beverly Hills on Monday (17th October 2011). The old friends were photographed hugging and chatting at the red carpet bash, 11 years after Reese famously played Jennifer's younger sister Jill on Friends.
According to the Press Association, Jennifer chose to wear a daring short silver dress with plunging neckline while Witherspoon opted for a conservative navy trouser suit. Speaking at the awards ceremony, which traditionally celebrates female Hollywood stars, Witherspoon said Aniston had "sex appeal and complete lovability", joking, "You just want to get your nails done with her and you want to make out with her at the same time. At least I do.And that's what we do sometimes on Saturdays". Stars to be honoured at the ceremony included Michelle Pfieffer, who opted for a black 1940's style dress, and Barbara Streisand, who attended with her actor husband James Brolin. Others in attendance included Evan Rachel Wood, her 'Conspirators' co-star Robin Wright, Nicole Richie, actress Freida Pinto and 'Mad Men' star John Hamm.
Jennifer was joined by her new beau Justin Theroux at the glitzy event, held at the Four Seasons Hotel in Beverly Hills. The couple reportedly moved to New York City's West Village in September.