Jennifer Aniston In Talks For The Switch

Jennifer Aniston and Dennis Quaid are in talks to join the cast of 'The Switch' alongside Yasiin Bay, John Hawkes and Ty Burrell. 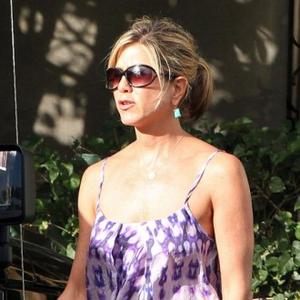 Jennifer Aniston and Dennis Quaid are in talks to join the cast of 'The Switch'.

The 'Wanderlust' actress - who previously starred in a movie with the same name alongside Jason Bateman - is up for the role of Mickey Dawson, while the 'Words' actor would be her crooked real estate developer husband.

The films sees Mickey kidnapped and held to ransom by two ex-prisoners - who will be played by John Hawkes and Yasiin Bay- but her husband seizes the opportunity to get rid of his wife and refuses to pay up.

This leads the kidnappers to try something new - teaming up with their hostage to get all of her husband's money.

'Modern Family' actor Ty Burrell is also part of the movie, playing Marshall Taylor, a married country club member who has a crush on Mickey and sees her get kidnapped -but can't decide whether to act.

The film is based on Elmore Leonard's novel 'The Switch' and the kidnappers Louis Gara and Ordell Robbie, appeared in one of the author's earlier books, 'Rum Punch' - the basis of Quentin Tarantino movie 'Jackie Brown' - but are not otherwise connected.

The two characters were played in 'Jackie Brown' by Robert De Niro and Samuel L. Jackson.

Dan Schechter is directing the movie.