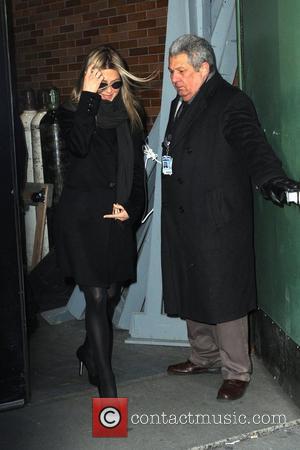 Jennifer Aniston debuted a new short hairstyle in Madrid this week.
JENNIFER ANISTON wowed the crowds at a promotional event for her movie 'Just Go With It' when she showed off her new short hairstyle, reports People Magazine.Aniston has said goodbye to her signature "long layers" and introduced a new shoulder-length bob. Although the new style has surprised some fans, Aniston had hinted at a new direction several weeks ago when she turned up to the New York premiere of the comedy movie with a slightly shorter cut. The magazine notes that the FRIENDS star's new style "marks a hairstyle milestone as she brings the length above her collarbone" for the first time in recent years. News of Aniston's new look comes after Justin Bieber revealed that he too had chopped off his signature locks. The 16-year-old pop sensation tweeted, "So it's true... I got a lil haircut... I like it... and we are giving all the hair cut to CHARITY to auction. Details coming soon".
JENNIFER ANISTON recently completed work on her new comedy movie 'Horrible Bosses', with Jason Bateman and Charlie Day. The film, directed by Seth Gordon, follows the story of three friends who conspire to murder their bosses they realise they are standing in the way of their happiness.