The acting couple have different destinations and budgets for their nuptials. 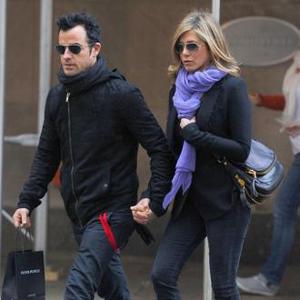 Jennifer Aniston and Justin Theroux both want different things for their wedding.

The couple recently announced their engagement, and while he bride-to-be would love to marry abroad, the groom is hoping for their nuptials to take place close to home.

A source claimed the former 'Friends' actress wants a ''destination wedding, kind of like eloping with a few friends. There will be The Feeling of a vacation, since that's their favorite thing to do.''

However actor/screenwriter Justin has other ideas.

The tone and theme of their future nuptials is also a source of contention. Although 43-year-old Jennifer will want to ''celebrate in high style,'' the friend explained: ''Justin isn't as flashy as the men she's been with in the past, so it won't go too over-the-top.''

Though they disagree over the details, in the end, both stars are thrilled to be taking this next step together.

A source says of the 'Horrible Bosses' star, who divorced Brad Pitt in 2005: ''Jen is over the moon about her second chance at a happy marriage. Justin is giving her a solid vow to love.''

It will be the first marriage for 41-year-old Justin, who split from longtime love Heidi Bivens in early 2011 after 14 years together.