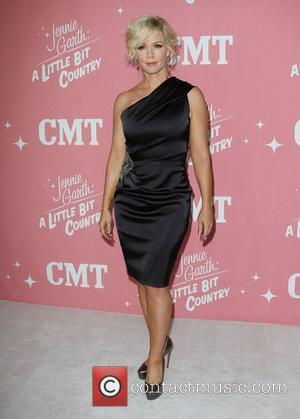 Actress Jennie Garth has surprised herself after separating from actor husband Peter Facinelli, revealing on the Ellen Degeneres Show that she feels "much stronger than I thought I was." The two split after 11 years of marriage together, and since then the former Beverley Hills, 90210 star has found out a lot about herself in the way she has coped with the divorce.
Facinelli filed for divorce from Garth on March 28th, citing 'irreconcilable differences.' Since then, both have appeared in a number of interviews but have remained frank about the split, with Garth's interview with Ellen Degeneres being the most open account of the separation so far. She revealed not only her newfound strength, but also why both have been unwilling to talk at length about the split and how she is coping as a single mother. The former pair has three daughters together from their time as a couple - Luca, 14, Lola, 9 and Fiona, 5, with Garth also explaining how the two are still trying to provide some kind of stable family for their children despite the split.
Garth was also on Ellen's show to promote her new reality series, A Little Bit Country, which sees her take on her new life having moved to a remote ranch in California following her separation from Facinelli.