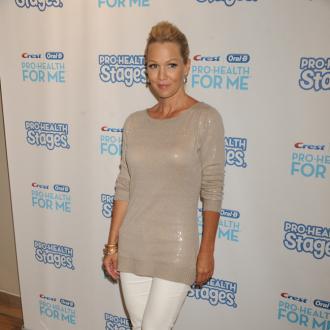 The 'Beverly Hills 90210' actress is reportedly smitten with the Big Gigantic musician and recently attended one of his concerts where she couldn't contain her excitement once he took to the stage.

A source told the National Enquirer: ''They were all over each other. When Jeremy's band Big Gigantic took the stage, Jennie was as excited as a teenybopper, clapping and jumping up and down with the music. No question they're a couple - and it looks really serious.

''Jennie told me, 'I never thought I'd fall in love again, but it's happening, and I couldn't be more excited!'''

Jennie, 40, was devastated when she split with husband Peter Facinelli last year but admitted the breakdown of her marriage was a wake-up call that she needed to start looking after her physical health and she subsequently dropped 30 pounds.

She said: ''Now I feel stronger and more confident in my body.

''I take my kids to school in my workout clothes. I'll think, 'I'm already in my clothes now, so I may as well work out!'

''I also weigh myself every morning. If I don't, before you know it, I'll be up 10 pounds. It creeps. This morning, it was up two pounds. That's OK. But if it's up six pounds? I need to make adjustments.''