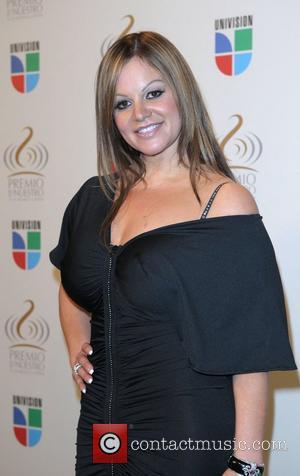 Latin singer Jenni Rivera has been released from police custody in Mexico after paying a fine for attempting to carry $50,000 (£33,000) in cash on a flight to the U.S.
The star was detained at Mexico City's international airport on Monday (18May09) as she waited to board a plane to Los Angeles after officials discovered $52,167 (£34,778) in her carry-on luggage during a random search.
Mexican authorities claim Rivera, who lives in California, only admitted to carrying $20,000 (£13,000), ignoring the law that anyone carrying more than $10,000 (£6,667) in cash between countries must declare it.
The singer's publicist reveals she was freed on Tuesday (19May09) after paying an $850 (£567) penalty, but insists the incident was a misunderstanding.
Rivera, who is now back in L.A., alleges she intended to declare the cash upon arrival in the U.S. and was unaware she had to alert authorities in Mexico about the money.
However, Rivera isn't in the clear just yet - the Attorney General's Office in Mexico City is still considering pressing charges.